Looking back and looking forward to European Pathways Conferences 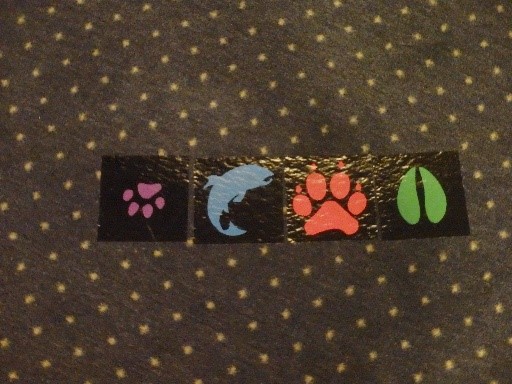 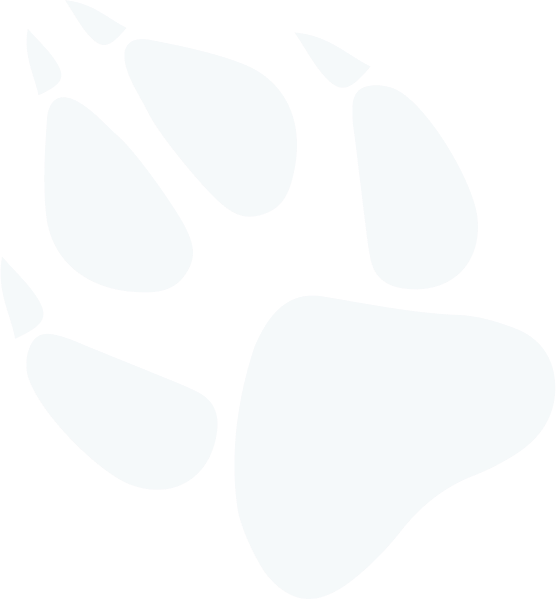 This week – September 23, 2020 – the second European Pathways Conference would be held in the Netherlands. Today would have been the closing day of the Conference. But, unfortunately, due to Covid-19 it has been cancelled this year. Nevertheless, the conference is postponed to 2022! Since I am a ‘fan’ of these kind of conferences in which scientists and practitioners learn from each other, I wanted to look back on the first European Conference I visited two years ago. Perhaps others have visited this conference too and also have some memories to share. Here is a recap I found in my journal: 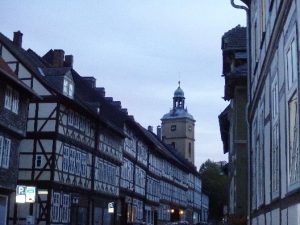 Great! Finally I was able to visit and present at the first European Pathways Human Dimensions of Wildlife Conference. Finally, this conference was held in Europe. Although the timing was not perfect at all (in the same week of my PhD-defence), it was not a question ‘Should I go?’. I just needed to go. I wanted to share this community the findings of my research.

Arriving in scenic Goslar in the Harz-mountains looked like arriving in a fairy-tale city. Goslar is a small but really nice town to wander around in between and after an intense conference. And this time of the year was beautiful, because the weather was great! I didn’t stay in the conference hotel, because I like to stroll a bit before and after the conference to settle my thoughts.

I chose this conference because it was the first European conference on the topic of human-wildlife conflicts/ human dimensions of wildlife, with the specific theme: Resurrecting the Wild!? Previous conferences were in the USA or Africa, which I was not able to attend. This time, although the conference was in the same week as my PhD-defence ‘Rethinking Wildlife Management: Living With Wild Animals’ (Friday 21ste), it was held so close by that it felt as a ‘must’ to be there and share thoughts with the variety of people I also aim at in my thesis: scientist, policymakers and wildlife managers. It was a delight to have this variety of conversations altogether! The whole atmosphere was really nice, productive and constructive. In the end it was just a perfect preparation for my defence. I could better  link my PhD research with the practice of human-wildlife conflicts.

The conference venue was at Hotel Der Achtermann, right near the train station, in the center of Goslar. The conference started on Monday early morning, but I arrived on Sunday morning and attended a pre-conference program.

I had never attended a pre-conference program before, but this time was different, because I wanted to learn as much as possible from the topic of human-wildlife issues, especially from practitioners worldwide and not only scientists. I attended the pre-conference training by Tom Fish, National Coordinator, Cooperative Ecosystem Studies Unit, U.S. National Park Service, Washington, D.C., USA, on the topic of ‘Increasing human dimensions capacity among protected area and wildlife managers’. There were about 15 participants in this sessions and we had 3 hours of discussion. We shared experiences and introduced each other which was a fantastic start for the whole conference, because this way I made some connections, which I still cherish. I also introduced my Phd thesis and the session of my presentation, which had been picked up by participants and had been told to others (which I have been told afterwards). The training touched upon the importance of the human dimension issues in wildlife management. And addressed how these human dimensions are often perceived by e.g. often ecologically trained wildlife managers. That there is a misunderstanding in vocabulary between scientists (social vs natural) and how to address these human dimensions in wildlife management issues by providing insight into a variety of case studies from around the globe, both in terrestrial and marine environments.  It is, he said, finding a common interest between different stakeholders and work from there onward. This touches upon one of the recommendations in my thesis, which was nice that this was confirmed as a step forward. 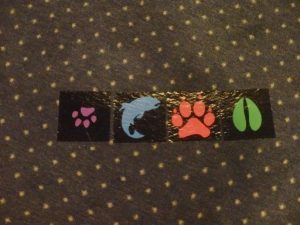 It was really fun finding your way around in the conference setting. We had to follow ‘tracks’ of e.g. fish, lynx, wolf and geese that were marked on the floor in order to find a particular session room. We also found them close to the hotel, on the street; tracks were painted including the name of the conference. So no doubt where to go!

I went to several talks, but also skipped some presentations to talk to others or to digest what has been discussed in the rather full sessions. Around 300 people were attending the conference and there were a little over 200 presentations. There were 4 parallel session every day and on one evening there was also a poster session. The latter I liked to attend, because I had time to speak a bit longer with some presenters who did research which was in line with mine or added value in how to understand some issues I found difficult to grasp.

For instance one poster presentation discussed what constitutes ‘wild’ in policy and conservation in general. The latter was a preliminary investigation about this ‘wildness’. And, at that very moment of the conference, ideas were collected from participants. This was a really nice way to collect some data, but also ended up in lively conversations. Additionally, I like to give a snapshot from some presentations I attended and what I learned from them.

One session was devoted to ‘Human-Wildlife Conflict’, which was pretty much ‘my topic’. One presentation in this session was about wild boar conflicts in Iran, which was very interesting (to compare it with the situation in the Netherlands). She argued that lethal control was the only way to control the population. This however, contradicts my statement of preferably non-lethal control to achieve cohabitation. In her case it was very interesting to note that religion played an important role in managing wild animals. This gives me a broader thought about the topic. (Meanwhile I have noted more of these religion-oriented human-wildlife issues around the globe). 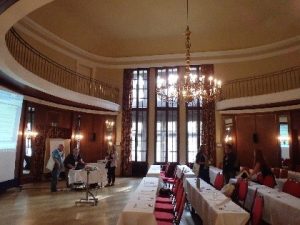 Another interesting session was about ‘Human-Wildlife Interactions: Turning conflict into coexistence’. What I especially liked about this session was a presentation focused on the role of the landscape in thinking about human-wildlife coexistence. This is also one of the points I raise in my thesis and is – yet – underrepresented in literature. So I was glad to catch up on this, or well, it had been presented as a rather new topic to be discussed further. Indeed it is and provides me with some new ideas or to pursue in this line of thinking.

In the session I was scheduled ‘Wildlife Management and Policy A’, I came talked with another presenter. He focussed on wild boar issues in the UK. It was nice to see similarities but also differences with my own research in the Netherlands on wild boars. Most of all, what struck me in this session, was that the presenters, including wildlife managers, were mostly advocating more standardisation, more categorisations of wild animals as well as humans, in order to find a common ground between social and natural sciences, while I advocate the opposite. So, after listening to these talks, I still had to present…..

My presentation ‘Wild Minds Seeking Cohabitation’, discussed that the focus in human-wildlife conflict issues should be on the interactions between humans and wild animals in order to seek cohabitation. Thereby the wild animals are not to be seen as objects, but as co-participants in managing such conflict situation. In addition it requires a joint focus on these kind of issues by both social scientists, natural scientists as well as practitioners. After my presentation I didn’t receive much response. Although, one question about how I conceptualised cohabitation, was a nice one, but again confronted me with the idea that this whole idea of ‘coexistence’ or ‘cohabitation’ is still rather new and unexplored.

That made me think (again).

My approach to cohabitation is that the emphasis is on the ‘co’. So shared by human and wild animal. And this perspective was rather new in this conference setting. Afterwards I had nice talks with some presenters, who in fact, share my thoughts. And, also did similar kind of research, however…didn’t dare to present it here or were told not to present it the way they would actually like to do. Again, I was a bit surprised… Others I talked to later on, also acknowledged that what I presented is far from broadly accepted and known in human-wildlife conflict management, but might really be a way forward. So, lots of food for thought afterwards…. 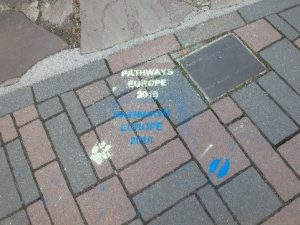 Altogether it was an intense and lively conference. I learned a lot about other human-wildlife issues; how these are dealt with and what thoughts are generally present in anticipating and dealing with these kind of issues. My point of view, obviously, is not widespread within this community – YET – , which I take as a challenge for the next coming years.

And so it happened!

Furthermore this conference prepared me well for my defence too, since I could tap into a variety of cases and see my research – again – in a broader light.

The journey into pursuing ways for humans and wild animals to co-exist still continues…..

This website uses cookies to improve your experience while you navigate through the website. Out of these, the cookies that are categorized as necessary are stored on your browser as they are essential for the working of basic functionalities of the website. We also use third-party cookies that help us analyze and understand how you use this website. These cookies will be stored in your browser only with your consent. You also have the option to opt-out of these cookies. But opting out of some of these cookies may affect your browsing experience.
SAVE & ACCEPT